A long time ago, after finishing High School I moved into a shared household in Jan Juc, a small surfie town in Victoria near Torquay. I was 18, had left all my friends behind and did not know a soul. It was two years after meeting my guide Rama through a channeler and although I had come to understand that I had lived many lives before this one, that I was a spiritual being, that I had a soul and could leave my body, I joined a Christian cult. It is my opinion that many things in life must be experienced and I suspect, before I was born I had chosen this one. My best friend came to visit me in my lonely, solitary place in Jan Juc, and told me she had found God. Now like Finding Godot, one of the books I studied in my Literature subject at school, my favourite subject, I had been searching for proof of God since I found myself floating above my body lying in bed.

It is an odd thing to be in No Space, yet see around oneself all at once, so after that, I felt lost in the physical world. ‘Just tell me the truth!’ is pretty much what I wanted to scream in the face of any wise looking adult. But alas, my beautiful friend Kim with her smiley face and starry eyes said, ‘Bron, I’ve found the truth’. Who was I to argue, I was stuck in a house where people had sex in my bed while I was away, and left cigarette butts in beer cans on my bedside table. I was getting out of there and moving to Melbourne no matter what it took. So I did, out of sheer necessity to escape my dreary life by the sea-side. I joined The Melbourne Church of Christ.

At this point I’d had no interactions with any Angelic beings at all. I didn’t really believe they existed. Yet I read this book given to me by another Christian, about the fight between good and evil through the Angelic and demonic realms which to me was fascinating! But other than that being in this Church was all about being perfect, there was very little . All of what I knew, what Rama, my guide had said during the channeling, all of the books I read on life after death and the esoteric, Richard Bach’s books, The Illusion and Jonathan Livingston Seagull, went out the window, bye, see you later, I’ll be in touch when I’m done exploring the concepts of heaven and hell. All of it, not discarded, but put away, in a box, that didn’t fit the reality I was in.

Because of this my idea of Angels at that point was pure science fiction and owned solely by the Christian Theology. It was unreachable, untouchable and nothing, literally nothing to do with me! Guides I can handle, even the odd alien back then was an idea settling in my mind as a very real possibility. But Angels, come on. I thought I would have to remain a Christian for them to even want to connect with me. Yet even that did not happen in the church. No matter how often I walked and begged none showed up. Until later….

It started as an idea. I had been meditating for a few years now, and through this, through learning how to half leave my body, receive information from many guides and sit in a space of reception I grew used to this energy of connecting. One lovely weekend afternoon, my husband suggested going for a Yum Cha lunch. I had been going in and out of trance type states for a while now, but I did not see this one coming. We sat down at a huge round table, the spinny thing in the middle which everyone loves to touch just once and spin, like touching wood for luck. I began to feel strange, stranger than usual. I felt my eyes focus back adjusting my vision to see the etheric, but actually ‘see’ in my mind’s eye. It’s like the two somehow go hand in hand or work together, spiritual sight and physical sight. My eyes adjust as though they are about to look at something, but the actual sight happens in my mind.

As my eyes focused I seemed to stare into a space that was to the right of the room. The more I stared the more entranced I became. Then the image began forming in my mind, a white female figure, pure and divine, a lady from the light. A face amidst white light, so beautiful so feminine. So the title formed as well, like a mantra, a chant and yet something I had never said before, ‘the lady from the light’. My son had been calling me, ‘mum, mum’ he repeated. I could only look at him quickly then had to turn back. ‘Mum,what are you looking at?’ Then I pulled myself away to look at him, feeling dizzy and nauseous from the energy.  ‘A female’ I think I said and that was it, I had to act normal. That night I was sick. I lay in bed unable to move my body. I thought I had food poisoning, but I had eaten everything the family had eaten and none of them were ill. The Lady From The Light…..I searched for images and found this, the closest to what I saw. 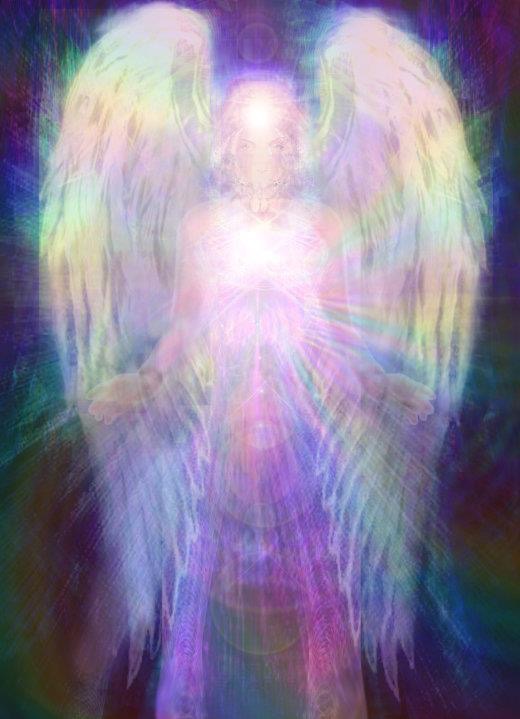 The next morning I left the house went for my usual walk in the bush. I thought I will try to communicate, what harm can it do. I’ll just look like a nut talking to myself. So I asked what is your name…and I heard the last part, ‘-aria’ but I could not make out the first letter. She said it again and I saw the ‘M’…’Maria’ she said. I asked who are you, and she said ‘I am Elohim, I am the light of mankind.’ And so she became my first real encounter with an angelic being, a being connected to the Christ consciousness. Here’s the thing, they are not as described in the bible, filled with human emotion. They come in as colour, she was white. It begins as a colour vibration, then maybe an image of something. Sitting in my Tarot Workshop with a group of girls, I looked up at one lady and saw blue. Blue, Blue, Blue filling the right side of the room. I asked her, who is that? She looked at me and she knew. I knew she knew! Our mind’s met and then I saw the sword. I said “Why is Archangel Michael next to you?’. She said ‘I called him in yesterday for my son’. Then the tears, the heaviness on the chest. It’s the crying that says it’s angelic! It hits you right in the heart. Like a release of pain, merging into love.

They are real. Maria says that she is the Mother of all souls and that a Guardian Angel is there at the birth of a human soul, the part of us that consists of the astral, mental and casual body. They take part in the  creating and forming of that one soul body for incarnation, and so like a mother with a child they are connected to us from the birth of our soul throughout our journey of lifetime, after lifetime, of incarnation. I have begun seeing them above people’s’ heads, I see them working in unison with that person, no matter how lost they are. They are not assigned to us, they helped create us, the ‘human’ us, not the huge Oversoul that exist in other dimensions. And so from Christian ideals of Angelic beings, to real ones, I know they are not isolated to religion, they belong only to the Angelic Realm that is directly connected to us. ‘How can you be separate from the very thing that created you?’ Maria said to me during one of my walks in the bush. They are the light of mankind that holds us in existence. So no matter where you are, what you are doing, how you are doing, how you are feeling, they are there, moving through life with you, above you. You need only look up, and quiet your mind, they speak in heart language and light. I recommend a walk around Gaia’s realm to do so…

Bronwyn looks at life through the eyes of a psychic. Although this is not something she calls herself lightly. It is something she has come to terms with over the years. Here she shares her day to day experiences as she strives for a spiritual life.